Aurizon and GVK Coal Infrastructure (Singapore) Pte Ltd (GVK Hancock) have reached a significant milestone towards their proposed transaction for the joint development of a rail line and a new coal terminal at the existing Abbot Point Port to unlock the Galilee Basin’s coal resources, including GVK Hancock’s Alpha, Alpha West and Kevin’s Corner coal projects.

As announced by the parties in March 2013, under the proposed framework, Aurizon would acquire a majority (51%) interest in Hancock Coal Infrastructure Pty Ltd (HCI), which owns GVK Hancock's rail and port projects, and would invest through upfront consideration at completion of the transaction and deferred consideration at financial close of each phase of the projects.

The proposed arrangement is intended to provide sufficient equity and debt funding (including through third party debt finance) for the projects to reach financial close.

The parties have made further progress over the last few months and have reached alignment on a rail solution and on the commercial terms for the proposed transaction such as governance, timing of milestones, funding and conditions for completion.

The proposed rail solution means that for an initial stage, only 300km of the 500km of new corridor and track under the original GVK Hancock proposal will be constructed before connecting into existing Aurizon infrastructure. This will also allow a phased development at the Abbot Point T3 terminal to match volumes and ramp-up, thereby materially reducing the initial cost of infrastructure. Under the proposal, the southern rail connection would be built to narrow-gauge specification to carry trains of up to 25,000 tonnes, with the option to consider an expansion to a full greenfield line (narrow or standard gauge) if increased tonnages later justify the additional investment.

The proposed open-access rail and port infrastructure being progressed by Aurizon and GVK Hancock also facilitates a staged consolidation of tonnes from multiple miners in the Galilee and the Bowen Basins. This will deliver significant benefits for regional communities by reducing the impact on agricultural land and the natural environment.

Dr G V Krishna Reddy, Chairman of GVK commended all involved stating “I am delighted that we have made significant progress towards realising this project. During the last few months, we have spent a considerable amount of time with the senior management of Aurizon. This milestone symbolises our common vision and I look forward to progressing this historic infrastructure development together with Aurizon.”

Aurizon Managing Director & CEO, Lance Hockridge said “There’s been considerable work by both parties over recent months to better define the rail transport solution for the project, both from an engineering and a commercial perspective. We can see from our assessment that GVK Hancock’s coal assets are very well advanced.”

“We’re pleased this also aligns with government objectives - getting early tonnes out of the Galilee, at lower cost by tapping into existing infrastructure and consolidating tonnages onto a common corridor.”

“This work not only brings us a step closer to jointly providing the primary rail and port solution for the Galilee, it brings the whole region a step closer to realising the benefits of one of the largest regional development opportunities this state has seen for decades,” said Mr Hockridge.

GVK Vice-Chairman Mr G V Sanjay Reddy stated "This is a large and complex transaction and today we have progressed a major milestone. The teams from both sides have demonstrated a commitment to bring this project to reality and have worked well together. We now look forward to the next few months as we work on the detailed documentation and start to execute our common plan to build and develop this infrastructure.”

Whilst the proposal remains non-binding and with further diligence to be undertaken, the parties are aligned on these key aspects of the proposal, with drafting of definitive legal documents now being undertaken.

Collectively the proposed development of the rail and port infrastructure is expected to attract an investment for Queensland in the order of $6 billion and provide over 1,300 jobs during construction and around 300 long-term jobs once operational.

Completion of the proposed transaction, including the upfront consideration from Aurizon, would be subject to the satisfaction of a number of conditions including satisfactory due diligence, final Board approvals, third party approvals (some of which are outside the control of the parties) and negotiation of final terms and definitive documentation.

Any deferred consideration beyond completion of the transaction (other than proportional project development costs) would be used to fund project construction costs and be subject to satisfaction of certain conditions, including third party debt financing and achievement of agreed take or pay contracts to underwrite the proposed infrastructure and a final investment decision by each of GVK Hancock and Aurizon.

Aurizon and GVK Hancock will update the market should the parties execute final agreements on all terms of the proposal. 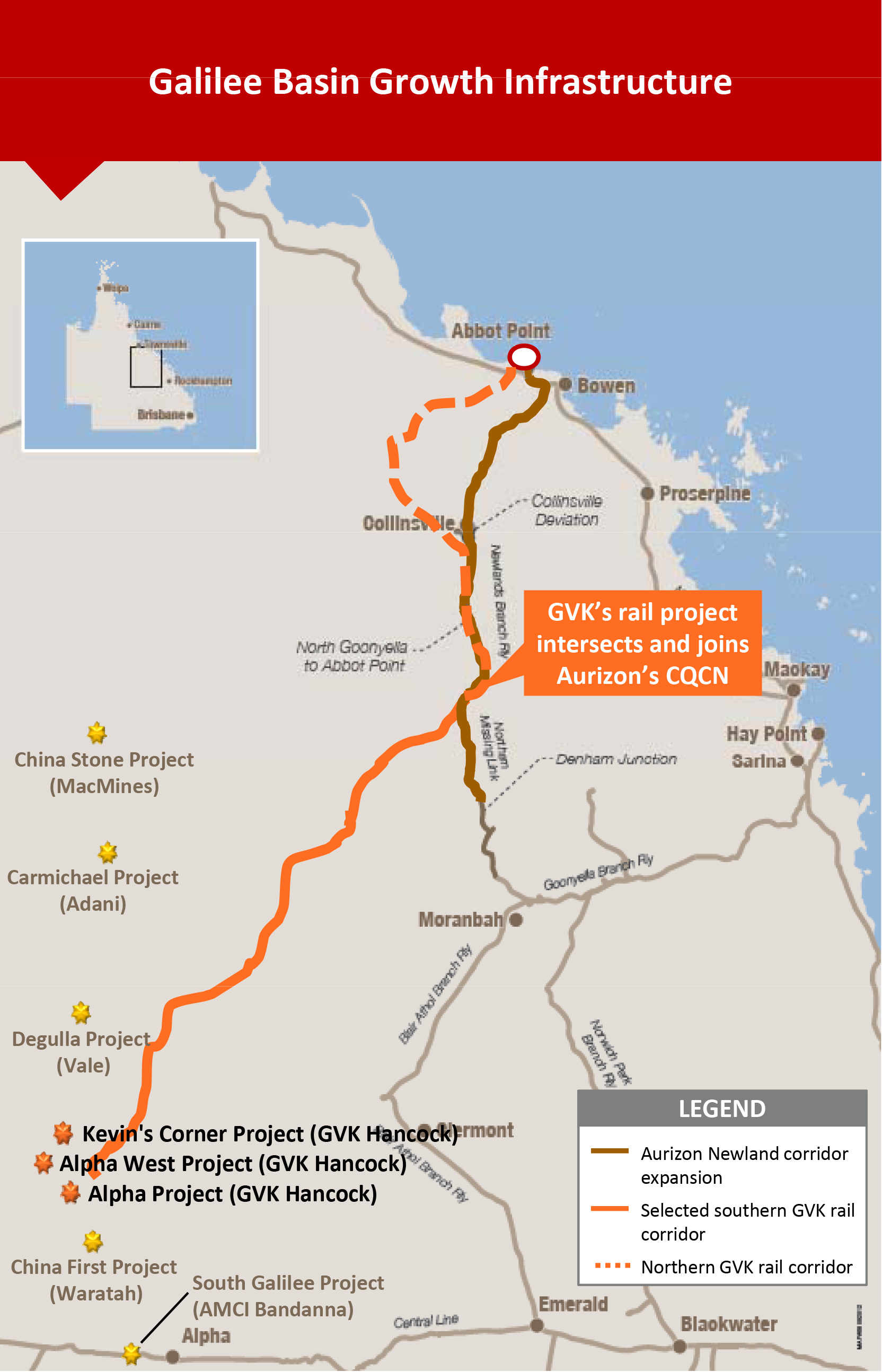